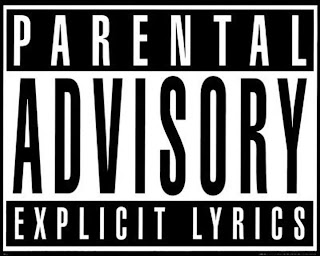 *Spoiler: This blog will contain language your mommy told you was bad.*

The other day, I was talking with my fifteen year old daughter about her (cringe) "love life."  It was horrible.  Not because I'm one of those deluded parents who thinks their children will never grow up and fall in love and do awful things to their bodies, but because I know that I will spend the rest of my life watching my kids get their hearts broken.

And I realized recently that parents have been censoring the wrong words, protecting their kids from words that don't mean anything, and letting the important words slip through without notice.  Here's an example:

Imagine a ten year old girl, hanging from the monkey bars at school.  She has sparkly Disney princess shoes on, and pink and purple bands are rotated along her braces.  Her bright green eyes go wide as she finds a boy standing near the ladder, awaiting his turn to cross.  "Fuck off, Timmy," she says.  "I just got up here."

Do you feel rage picturing that scene?  How could a little girl talk like that?  Didn't her mother teach her better?

Yes, she did.  I know this because I made her up in my mind, and her mother hates the f-bomb almost as much as she hates meatloaf.

Here's a scene (absolutely true, although I still don't really believe what I saw) I witnessed in the grocery store the other day:

A little boy, not more than six or seven years old, is buckled into the child seat of his shopping cart while his mother loads groceries onto the counter.  He has a blue stain around his mouth and a lonely lollipop stick stuck to the front of his tiny Polo shirt.  He sees a picture of the President on the cover of a magazine and points, "Mom, look!  It's Obama!"
The woman sighs as she hefts a sack of potatoes, "I see, honey."
"I hate Obama, right mom?"
"Yes, honey."

What the hell?!  I wanted to scream, "He's five goddamn years old!  The only thing he should hate right now is broccoli!"

But I didn't scream.  I gritted my teeth and fought back the angry bile and squeezed the shit out of my Charmin.  Although, I guess technically it wasn't mine yet, since I hadn't paid for it.

And therein lies the rub (not the toilet paper, the stuff up in italics).  Parents recoil in terror when a little girl says "fuck" or "shit," but we bandy about words like "love" and "hate" without thinking.  Dad hates the bill collectors.  Mom loves Tom Brady's ass in those white pants footballers wear.  Mom hates cop shows.  Dad loves beer.  Timmy hates getting his hair cut.  Little Susie loves her Barbies more than anything in the world.

We teach our kids that any positive or negative feelings we have towards someone or something equate to love and hate.  We don't do it on purpose, but we do it.  Love and Hate are both huge words which carry connotations which affect everyone in the world.  Wars are built on those words.  Murder.  Marriage.  Family.  Children.

"Please don't cuss around my kids," I said.  At least eight million times since I became a father.  I was scared for my babies' ears.  They're all innocent and beautiful and not yet corrupted by the world.  But now I see it differently.  Fuck, shit, ass, bitch, damn, hell, dick, etc... these words are not going to corrupt my babies.  The only power those words have is the power we give them.  They'll learn them and use them on the playground no matter what we do.  They like them so so so much, because we have made them sacred.

Really though, the words that we should be making sacred are words like Love and Hate.  These are the words we should teach our children to use sparingly.  "Fuck" is just an expletive, "Love" is dangerous.