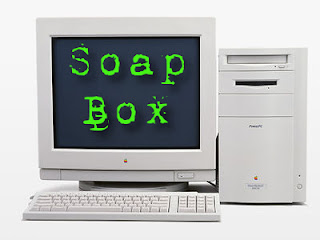 I don't like taking a stand in public.  I want people to like me, to look back at the things I've blogged about and the things I've written, and say, "Yeah, I can get behind that."  So when I blog about how awful it is that some blonde demon is on video throwing a box full of puppies into a river, I'm not really stepping out on a limb.  When I say that any writers, especially self publishers, need to edit edit edit so that they can turn out the best book possible, I'm not saying anything that most people shouldn't already know.


Today, I have something to say that isn't universally approved.  Some people may not like it, and you might be one of those people.  I'm not sorry, and I won't apologize.

A New York Times article came out on the 25th, about a man who made a business out of writing favorable reviews for books.  I'm not going to get into all of the details, here's the link: NYT Article

Doesn't self publishing have enough of a bad reputation already?  Come on!  Paying people to give your book five star reviews is abhorrent.  If you don't believe that your work will stand up on its own, DON'T PUBLISH IT.  If you don't have the faith in your novel/short story/book of snot paintings, why are you willing to ask readers to pay for it?  Shame on you.

It's hard to get people to read your book when you're unknown.  I get that.  I am that.  But I don't write for a paycheck.  I write because I love it.  I always have.  It's been said a million times, but I'll say it again: If you are writing because you want to get rich, you might as well quit now.  Writing should be work, hard, scary, sometimes a little heartbreaking.  But totally worth it in those moments when the white of the page is just melting away, when it feels like the story is writing itself.

There are honest people out there willing to read your book.  Just keep looking.  Goodreads is great, the Amazon forums even, your damn Facebook.  Or, if you just have to get a hundred reviews, go to somewhere reputable, where the reviews are honest.  Believe in your work enough to let people be honest.

Full disclosure: I had a blog tour for The River Runes not long ago.  I paid a third party $45 to get five or so bloggers to read and review my book, and others to do interviews with me and let me guest post on their blogs.  I don't think the bloggers got paid, I'm not sure how they work that out.  It was made clear to me, from the beginning, that the reviews would be honest, even though I was paying for the service.  I wouldn't have it any other way.

I'll be honest, I was a little scared that I had just paid for people to read my book, and they might all hate it.  But I believe in my book.  I wouldn't have published it if I didn't.  The reviews came back better than I expected.  They ranged through three, four, and five stars, but they all had very kind things to say.  I even picked up a few new readers that have contacted me since then, because they found me on blogs that they already followed.

After reading this article, though, I don't think I'll even be able to use this kind of service again.  It feels too close.  Although, I think the service was great, and probably a very good idea for people just starting out.  I don't know, maybe I can just stop being antisocial and contact the bloggers myself next time.  I think I'll feel better about the whole thing if money never exchanges hands.   But big publishers also pay for reviews.  The New York Times, Kirkus, and lots of other reputable sources accept money or trade advertisements to give reviews.  Honest reviews.

Back to the point.

Write the best work you can, and then trust the readers.  Some of them are not going to like it, some of them will hate it, but if you poured your heart into it, and edited it until it was raw, someone will like it.  I believe that there is an audience for everything out there, even if it takes a while to find.  Best of all, you can feel good knowing that any good reviews you get are honest.

Self pubbing is hard work.  Anything that gets done to your book, gets done by you.  After writing you still have to edit/choose an editor, edit again, find/make a good cover, format for publication (on ebook and/or paperback), and then you have to help that book find an audience.  And if you are self publishing your first book, you are starting at the very bottom.  I think it's worth it, though.

I know how disheartening it can be to be an unknown.  I'm still unknown.  Since I first published The River Runes, over a year ago, I've given away/sold less than a thousand copies.  I'm okay with that.  That means that almost a thousand people have bought/asked for/maybe even read something that I wrote.  Now, that's cool.
Posted by Ken Lindsey at 8:34 AM No comments:

I've been gone for a while, kind of an unofficial hiatus.  Sorry about not giving warning, but life does get in the way sometimes.  Thanks for sticking around though!

I don't have a ton of news to share, but there are a couple of things.  Brace yourself!

I am ridiculously excited about Mars and the Curiosity and all the gorgeous photos and space-type amazingness.  If you have somehow missed out on all of that, go do the Google thing and get yourself a faceful.  Do it.  Now.  I'll wait.  (No, this isn't exactly news about me, but I'm excited so I'm sharing my excitement.  you're welcome.)

Ken!  You were going to tell us about how your marketing and stuff has affected your sales and stuff.  And stuff.

Right!  I'll do that now.  I haven't learned anything.  Sorry to disappoint, but I haven't seen any real changes with either the blog tour or the free Amazon days.  I did, however, give away several hundred books.  Hopefully some of them will be read by people just like you, and maybe even a few of them will enjoy the book.  That's what it's all about anyway, and I am very happy to gain any readers that I can.

Ken!  What about Clockwork Charlie and the next book in the Caithiir series?

Yeah...  Clockwork Charlie is still puttering along, but I've started another couple of things so I'm not as close to done as I would have liked.  It's going well though, and I'm still very excited about CC and I can't wait to get it out there for everyone.  As far as the next book in the Caithiir series goes, it's on the back burner for now.  Frankly, I have other things that I am in love with right now that I want to get done first.  It will be coming eventually, and the story is already pretty well outlined up in my brain meats.

Ken!  What other stuff are you working on?

I've started a noir style mystery/thriller that I'm having a lot of fun with.  The language is rough and the main character is rough and the violence is rough and the alcohol/drugs/sexiness is rough, so it's definitely not for the kiddos.  No title yet, but once I get it figured out I'll let you know.  I'm targeting this one at a much shorter word count (probably only 30,000 to 50,000 words) which might mean that it's a novella rather than a novel.  I'm never sure about the lengths of the different types of stories.

Ken!  What are you reading, and should we be reading it too?

Right now I'm reading The Mists of Avalon and Stories.  The Mists of Avalon is good so far, and has a lot of great Celtic religious stuff in it that I enjoy.  Honestly, it started out slow, but once you get to the meat of the story it's well worth it, in my opinion.  I'm also reading Stories, which is a collection of short stories by folks like Neil Gaiman, Chuck Palahniuk, Diana Wynne Jones, and a ton of others.  It's great and you should read it immediately.  That's all I have to say about that.

Ken!  Why do you keep doing this?

Because I'm bored and I like to imagine a whole lot of people just as excited as can be to hear what I have to say.

Alright, that's it for today.

Thanks for reading,
buh bye then
Posted by Ken Lindsey at 1:56 PM No comments: