Hey, good morning... What? Anymore coffee... No I'm afraid I drank it all. Sorry 'bout that.

Some mornings it just seems like there is not enough coffee to go around. But hey, it's Friday, and that means it's time for some updates.

As I mentioned before, I have been a pretty big slacker recently and not a lot has gotten done. However, I've been working steadily this week and things have been pretty smooth and awesome, so I do have some stuff to update you on.

Sadly, Clockwork Charlie still sits in the mixer, with no new word count or changes. Don't worry, she's patient and it's probably better that she have some extra time before I put her through the things she's about to go through. Oh yes, there will be a lot of rough times for young Charlie... MWAHAHAHAHA!! (that was my evil laugh)

Changes are abounding for "The City" though. First of all, the title is almost definitely changing, though I haven't quite found the right replacement yet. Also, the city that the story is about has been given a name. Yep, I listen when my crit partners speak, and naming the city was mentioned by more than one of them.

Next, the ladies that are featured in the story are going to be more rounded. I set them up for awesomeness, and then being lost in the story of my main character, kind of left them by the wayside. Therefore- more girl butt kicking to follow. :)

This isn't a huge number change, but aside from editing, I have also been adding and changing a lot. So, there ya are :)

hope your week was great,
buh bye then
Posted by Ken Lindsey at 7:25 AM 2 comments: 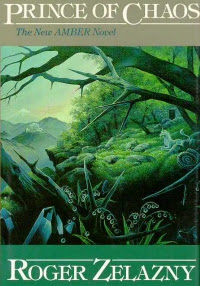 Well good morning (or afternoon or night), nice to see you again.

I know a lot of hardcore readers. I really do. As a matter of fact, if you ask nearly anyone I am close to about their favorite book, the answer is sure to be a broken down list of genre, sub-genre, writing era, and possibly even potential for a zombie filled re-write. The point is this: when you read a lot, you are always finding new books and authors to love, love, love.

Today, I want to talk about an amazing fantasy author that I was very late in learning about. In fact, I had never even heard his name until my girlfriend loaned me a book, just after we started dating. The book was entitled, "Jack Of Shadows" and it was written by the amazing, Roger Zelazny. From the beginning of this fairly short novel, Zelazny had me hooked. His style and pace were very unique, and you can see that Neil Gaiman was influenced by his writing. Wow, what a book!

I was hooked and had to find more. Enter: The "Amber" series.

The Amber series is a collection of ten fantasy novels with a very rich story throughout. Although I have to admit that you can tell the first and second halves of the series were written with some time in between, it was still an awesome collection. Heck, I found out a few weeks ago that the series has an entire role playing system built after it.

Obviously, I missed the bus on this one. Or, I was at least late to catch the Roger Zelazny bus, but I'm glad I finally did. I recommend that everyone find a friend with a Zelazny book (there are lots) and ask to borrow it. Unfortunately, this great American fantasy writer passed away back in 1995, so there won't be any new titles to search for, but find everything you can, and give it a shot.

I recommend starting with Jack Of Shadows, it's still my favorite Zelazny book (though I still have lots of others to get through).

I think that's all for today.
Any thoughts? Ever read Roger Zelazny?
Ok then, buh bye now
Posted by Ken Lindsey at 6:35 AM No comments:

Hey there, you look great today! Have you been working out? ;)

Well here we are again. It's Monday, and I am right back on track (even if the track is very, very late). So something that has been on my mind a lot lately, as well as a big topic around the interwebs, is the battle between real-life, paper books, and e-readers. People everywhere are sharing their opinions, letting the world know that their preferred method of receiving and reading books is the one that will last for eternity.

Why does it have to be a battle? I love books. I love the smell of new books, and the smell of old books. I love the crinkling of the paper beneath my fingers, and the way the spine of a new books cracks when you open it all the way up for the first time. Hardcover or paperback, I care not. Although the only type of book I have ever gotten a signature on was a comic book, I love the fact that you can get your favorite author's autograph right on or in your book, and save it forever.

This may make you think that I am all pro-paper books. Even though I am very pro-paper books, I am in no way anti-e-reader. I think it's brilliant, and I remember how excited I was when my friend, Lucas, showed me his first e-book (this was ten years or so ago). It was "Through The Looking Glass" and it was all there. The illustrations and page numbers, and of course, the story itself, all shrunk down and kept inside of that tiny magic box.

As I stated earlier, I love books. However, books can be unwieldy at times, and who hasn't borrowed a library book that was missing a crucial page (or even torn a page themselves)? Also, for those folks with a tight budget, (cough cough, like me) buying new books can mean digging out loose change and sighing a lot.

Of course, e-readers have their weak spots as well. Like the Wicked Witch of The West, water will take those little guys out. Although buying the books to put in your e-reader can be cheaper than paper books, most e-readers are not cheap. The initial expense may be more than most folks want to pay (especially if they don't know how much they will like it).

The point of all this rambling is to say that I am on both sides. Pack your e-reader in your carry-on luggage and choose what you want to read, when you want to read it. Grab whatever paper book you are currently reading, and hop into a nice hot bath (water is not good for paper books, but an accident doesn't mean the end). The great thing about e-information is that it doesn't take up any space. You can still fill your bookshelf with paper and cardboard, even if you have a Kindle full of Harry Potter.

Any thoughts?
I need more coffee.
Ok then, buh bye now
Posted by Ken Lindsey at 8:55 AM 2 comments:

Wow, it seems like yesterday that I set out to meet a blogging goal of Mon, Wed, and Fri. And yet, I haven't posted anything at all since mid-November. Hmmm, well I suppose there is some explanation necessary, though maybe not... :)

I got a new job, which has caused some of the hold up. I'm not going to go into it, but I am now writing for a living. It's a very loose translation of the dream, but it is a first step that I'm very happy with. And then, of course, we had those Holidays. Planning and family stuff, stress and finances... blah blah blah, I already said Holidays, so I'm sure you understand.

I am back now, however, ready to start right back where I left off. I haven't gotten any real work done with my writing either. It didn't really dawn on me until the other day when my amazing girlfriend looked at me curiously, and asked, "Why haven't you been writing?" It was a simple enough question, but I stammered a bit and realized that I had no real answer. I just wasn't.

It is time to get back on track. Starting Monday, I will be hopping back into a firm schedule that includes plenty of time for both work-writing, and real-writing. I am also determined to lose the Holiday weight I have gained (though it doesn't seem fair that it comes on so much faster than it goes off).