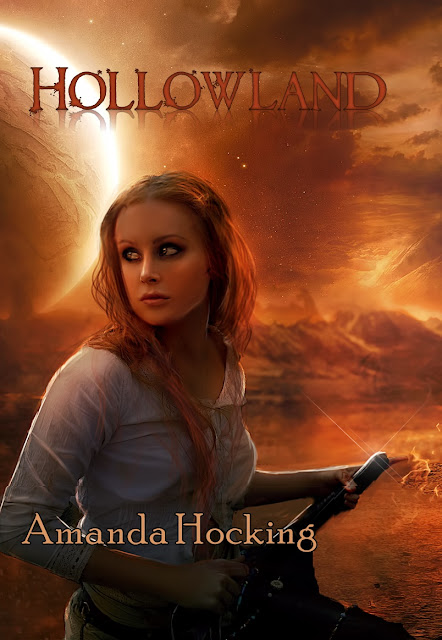 The Novel: Hollowland (The Hollows #1)
Hollowland is an urban fantasy/romance/zombie tale, written by Amanda Hocking.

Goodreads Description:
"This is the way the world ends - not with a bang or a whimper, but with zombies breaking down the back door."

Nineteen-year-old Remy King is on a mission to get across the wasteland left of America, and nothing will stand in her way - not violent marauders, a spoiled rock star, or an army of flesh-eating zombies.

I downloaded this one on my computer quite a while ago, and then just never really got around to reading it. I wasn't worried because, let's face it, Amanda Hocking has no shortage of reviews, whether they be good or bad.

However, one snowy afternoon, when I was too lazy to get my butt to the library, I busted out my smartphone and decided to start reading Hollowland. It was definitely a pleasant surprise. I was well absorbed into the story of Remy King as she stomped across the country on the skulls of a dozen zombies. There was a good amount of action and enough gory descriptions to make this a zombie story well worth the read. I was a little worried about the romance part of the story, but it was comfortably down-played in the wake of the zombie uprising.

I can't say much about the story itself without spoilers, but I'm glad I read it. I either got it for free or for 99 cents at Amazon (I can't remember) but either way it was worth it.

Hollowland gets 4.5 stars from me.
Posted by Ken Lindsey at 10:21 AM No comments:

I'm giving blood today, and for some reason I'm just a bit nervous. I've given before, I don't get queasy or nauseous, but it's been about two years (since just before I got my tattoo) and I feel like it's my first time.

In other news, my editing is going well! I can't remember all the times I've had to stop, shake my head and say, "What the hell, Ken?!" Right after I finished The River Runes I was flush with excitement and ready to start selling a million copies. So it's not surprising that I got impatient, half-assed my line edits, and convinced myself that my pixelated cover art was awesome.

Ouch. Here I am, almost a year later, and only now doing proper edits and re-writes (oh, and I have a much better cover that I am in love with!).

What have I learned? PATIENCE! Holy rusted metal, Batman, be patient with your work. Putting out something that isn't quite finished isn't going to help anyone, and may even be harmful. Learn from my mistakes and don't publish or send queries to agents and publishers until your book is DONE. If you can afford it, hire and editor. If not, edit once, walk away from your story for at least two months, (if not longer) and then do another edit.

Oh well. :) I'm happy with where The River Runes is now. Even if I wasn't, it's not like I could take it back, so what's the point in being upset? I'll fix what I can and make it better.

Besides, everyone loves a second edition, right?

Thanks for reading,
buh bye then
Posted by Ken Lindsey at 9:07 AM 3 comments: It's Pi Day, and although I'm not really a math guy, I can totally appreciate Pi Day. So, if you are a math nerd, or know a math nerd, be sure to celebrate Pi Day with as much enthusiasm as you can muster. Go 3.14!

Anyhow, I'm not doing a ton of social networking right now, but I will be around. As much as I want to build an awesome legion of followers by being witty and loveable, it is more important that I actually do the work of writing right now. After a lull like the one I have just been through, writing is the only way I can really get back on track.

But, I'm not going to disappear. I want to get to know more of you folks out there. I want to read your blogs in the morning whilst I chug gallons of coffee like a frat boy with a funnel full of PBR. If you want to talk, email me or Tweet @kenlindsey1981 or leave a comment.

I'm still reading as well, but I'm not promising when I'll post book reviews. When I can, I will. I'm still reading indie books, and eventually, when I'm caught up and feeling better about having been a huge slacktard for the past six months, I'll probably jump back into a weekly review to help support my indie author homies.

Some good news: I've been doing writerly type stuff and things everyday. It's mostly been editing (I'm going to be re-releasing The River Runes soon, with better editing, a bit more story, and a much better cover) but at least it's productive.

Ok, folks, thanks for reading! I think that's all I have for now :)

Buh bye then
Posted by Ken Lindsey at 9:25 AM No comments:

Wow, has it really been that long? A lot has happened in my world, Dear Readers, although none of it has been anything to write home about (and by home, I mean the internets, and by write, I mean blog).

I got a job, the kind that takes huge chunks of your life away and replaces them with little pieces of paper that you can use to pay rent and buy food (you know, the unimportant stuff). I've had this job for... can you guess? Six months. I'm glad to be able to pay the bills, so in part I am grateful for my job. However, I have this feeling just about everyday. It's a feeling that rises after another 12 hour shift, before the next 5 or 6 hours of sleep. I feel like I am working only to pay the rent, only so that I can have a place to sleep, only so that I can sleep before I have to go back to work.

Wow, that all sounds kind of angsty. I suppose it is, but it's also honest.

I need to write. When I'm not writing, things start to feel very closed in. I need to make better use of my time, but sometimes it feels a tiny bit hopeless. However, I know that I'm the one in control of these things, and if I want to write, I should just write. Right?

Well, here's to managing free time. :) If you live within walking distance, the coffee is on me.

Thanks for reading, I feel a little better already,
buh bye then
Posted by Ken Lindsey at 3:58 PM 2 comments: